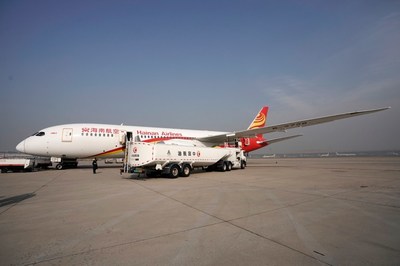 Hainan Airline adding bio fuels to its aircraft before the flight takes off from Beijing to Chicago on November 21st, 2017

Hainan Airline's high performance reflects its use of Boeing's fuel-efficient aircraft: Dreamliner 787. Of Hainan's 3,200 transpacific flights, covering 9 bases in America and accounting for 14 US-China routes in total, the carrier used Dreamliner 787 for over 80% of these flights. The company currently owns the most US-China routes as well as the biggest fleet of Dreamliner 787, with the total number of 26 aircraft. The use of this aircraft reduces carbon dioxide emissions by 16% compare to other models of aircraft. It also provides travelers with a more comfortable and safe flying experience.

Airlines with lowest overall fuel efficiency, such as Asiana, Korean Air and Qantas, predominately use two-engine aircraft including the Boeing 747 and Airbus 380. "There's a reason that airlines around the world are starting to avoid very large aircraft like the 747 and A380," said Dan Rutherford, ICCT's aviation program director and co-author of the paper. "Newer twin-engine widebodies provide the payload and range capabilities needed for transpacific flights with much lower fuel burn."

Aviation is a major contributor to climate pollution, accounting for about 2.5% of global CO2 emissions. The International Civil Aviation Organization (ICAO) forecasts airline traffic in Asia/Pacific will account for 31% of CO2 from international aviation in 2020, with North America at 15%. In order to achieve ICAO's long-term, aspirational goal of increasing the fuel efficiency of international flights by 2% annually, more fuel-efficient wide-body aircraft will need to be introduced to keep up with demand.

Besides aircraft type, Hainan Airlines has also been exploring other strategies for green travel and sustainable development. In June 2016, Hainan co-founded the "Green Aviation Initiative Network" with 27 other companies, aiming to develop a platform that facilitates conversations on green travel. The GAIN Network has hosted multiple forums and community activities so far. A year later, on November 21st, 2017, Hainan completed its first transcontinental flight with an aircraft fueled in part by bio fuels derived from waste cooking oil. The plane took off from Beijing and landed in Chicago. It marked a step forward in China's plan of meeting goals for a green economy.

As the first airline from mainland China to be included in SKYTRAX's Top 10 Airlines of the Year list, Hainan Airlines has been actively undertaking its social responsibility as well as promoting the development of green aviation. In the future, Hainan Airlines will introduce more environmental-friendly aircraft, incorporate more new technology and promote more new initiatives in order to carry out the concept of green aviation with practical action, and provide better "five-star" airline service to its travelers.