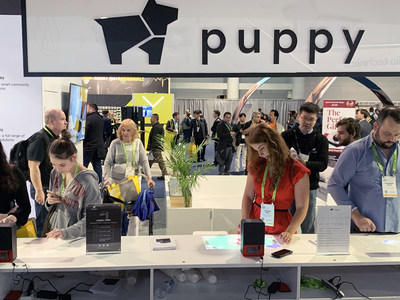 This is the first time that Puppy Robot has participated in CES to demonstrate its product lines. It is also the first time for puppy homey to been introduced to the public. After a year of research and development, Puppy Robot has completed the smart life products layout from "home to community, control to interaction"

At the CES LVCC South Hall 1, Puppy Robot built an open exhibition space. In order to demonstrate the puppy cube, multiple virtual touch screens, with rich applications in entertainment, education, office and other fields, were installed in the space. Puppy cube's Anytouch technology can project any plane onto a touch screen, bringing a unique interactive opportunity. The site has attracted partners from various industries, including gaming, sketching, video conferencing, children's apps, and CAD modeling, to experience the smart interactive space Puppy Robot has created.

On the first day of the exhibition, puppy cube's booth was one of the most popular booths at the South Hall. Media such as FOX Channel 5, Cityline TV in Toronto, and Israel's Isareli channel 10 were present. In addition, Amazon, Google and other exhibitors gave a high rating to the puppy cube. Business partners from the US, UK, Israel, Japan, Mexico and Southeast Asia came to communicate future cooperation.

Puppy cube is the main product for Puppy Robot to demonstrate at CES. It has been seen as the bridge and control center of the smart home. It carries the overall concept of Puppy Robot. For example, through online recipes and touch operations, puppy cube creates a smart kitchen that uses space and enhances the fun of cooking. Through sound and video interaction, users can upgrade the quality of personal fitness. The 23-inch touch screen can be used to improve communications and deepen connections between parents and children, whether through online education or gaming.

Puppy Robot hosted a lottery in which an exhibitor from Japan took a puppy cube home as the prize.

Tang Chenyong, vice president of marketing for Puppy Robot, said that the puppy cube can be interconnected with various smart devices to create a smart home. During the exhibition, partners from around the globe have come to communicate and hope to introduce the new smart life scenarios such as food ordering, entertainment, information inquiry and online education through the introduction of puppy cube. 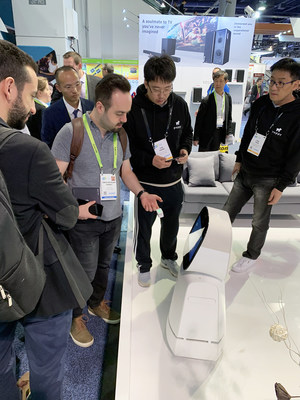 Puppy Robot's first family health guardian robot, puppy bingo, is also being demonstrated to the global audience at CES. Puppy bingo has a variety of testing accessories to monitor and record the user's body temperature, blood pressure, blood oxygen and other indices to achieve health management of family members. Using intelligent vision technology, puppy bingo is capable of identifying abnormal posture to detect any possible ailments. It is also capable of making a remote call to emergency service providers if assistance is needed.

Puppy bingo's built-in radar combined with multiple vision sensors is able to achieve autonomous obstacle avoidance in navigation. Users can make audio/video calls with the phone application to remotely access security services, monitor the air quality in their house, and identify any leakage such as water, natural gas or other potential hazards.

The third product featured in the Puppy Robot exhibit is puppy homey. Puppy homey is a community security solution based on visual intelligence technology with full autonomous algorithm capabilities. Through facial recognition and abnormal posture recognition, it is possible to automatically monitor, display, and alert users of possibly threatening individuals, abnormal routes of monitored individuals, and falls of the elderly, therefore, effectively reducing the incidence of community safety problems and improving the safety index.

The puppy homey can identify users' identity/posture through facial and bone recognition, then let the machine read each persons' body language. The richer the user data, the higher the accuracy. Cai Wei, vice president of puppy robot, has developed a smart community based on visual intelligence technology. It improves security and convenience, and generates new ecological and business models.

Cao Nan, the COO of Puppy Robot said that technological innovation first promoted the upgrade of basic needs. Puppy Robot hopes to develop through AIoT (AI+ IoT), visual intelligence, big data, mobile Internet, voice recognition and human-computer interaction, creating breakthroughs on key technologies to promote the experience and innovation of living spaces under advanced technologies. At present, many real estate companies in China have used these products in residential communities. The reason for going global is to acquire more partners from other countries and regions, complete brand upgrades, and promote product lines to the world.