Artprice by Art Market: The Geopolitics of the 15th Lyon Biennale

PARIS, Sept. 18, 2019 /PRNewswire/KOREA IT TIMES -- Some fifty artists have been commissioned this year to produce in situ artworks at the former Fagor factories in Lyon. It's the first time the Lyon Biennale will make use of the 29,000m² site located not far from the highly symbolic spot where the Saône flows into the Rhone. Entitled "Where Water Comes Together with Other Water", from a poem by the American writer Raymond Carver, the theme of mixity has clearly been singled out as the dominant focus of this 2019 edition and the whole thing has been put together by the young team of curators from the Palais de Tokyo in Paris. 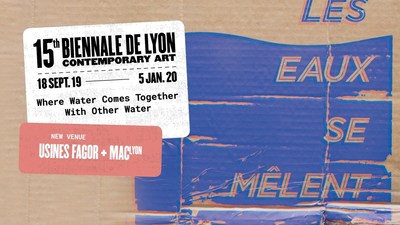 The Lyon Biennale is seeking to establish itself as a major event in the international Contemporary Art calendar and is supported by a substantial budget, but its primary responsibility is to highlight French culture and promote France's power and influence. The result is, of course, a delicate balance that has to be re-imagined every two years... a challenge for its new Director Isabelle Bertolotti.

thierry Ehrmann, Artprice's CEO/Founder, explains "Created in 1991 by Thierry Raspail, the Lyon Biennale has become one of the most remarkable cultural events of its kind worldwide. I particularly remember the legendary 2000 edition when Jean-Hubert Martin achieved a veritable tour-de-force with his Biennale entitled Shared Exoticism. The event was exceptionally coherent and relevant, a direct and logical suite to his founding exhibition The Magicians of the Earth presented in 1989 at the Pompidou Center.

Steered by Thierry Raspail for nearly 30 years, the Lyon Biennale has earned a global reputation and has been supported – in particular for Shared Exoticism – by its institutional partner Artprice and the Organe Contemporary Art Museum which manages The Abode of Chaos. Over the years it has come to overshadow the Paris Biennale, founded by André Malraux in 1959 and the last edition of which was in 2008."

The Lyon Biennale is today at a crucial juncture with the first change of management in its history and the arrival of Isabelle Bertolotti. Recently appointed Director of the Museum of Contemporary Art of the City of Lyon, Bertoletti is expected to set the Lyon Biennale on a new path and her first project is indeed ambitious: "This 15th edition of the Lyon Contemporary Art Biennale is devised as an ecosystem at the intersection of biological, economic and cosmogonic landscapes. It bears witness to the shifting relationships between human beings, other living species, the mineral kingdom, technological artifacts and the stories that unite them"

The curators and artists involved in this year's Lyon Biennale have been working with a number of obligations and constraints. First and foremost among these are related to the place itself: a huge factory located outside the city center and preserved in its original state, with its original demarcation, its abandoned machinery, and its visible wear and tear. The artists – most of whom have had very little exposure in France and often no auction history to their names – have been asked to work with local artisans from the Rhone Valley basin. One-third of them are French and a strict gender balance has been applied.

The Biennale is by no means confined to the vast Fagor space; there are manifestations throughout the region. The new format is organized around four complementary platforms: the Museum of Contemporary Art in Lyon, which is acting as an outgrowth of the main exhibition with 6 artists including the famous duo Gregory & Daniel GICQUEL & DEWAR; the Young International Creation which – as in the past – will occupy Villeurbanne's Institute of Contemporary Art; Veduta which promotes meetings between artists and the region's inhabitants; and a broad program of associated exhibitions, including exhibitions in Resonance with the Biennale at various galleries and cultural venues in the region. In all, the event will use 150 venues and will encompass not only the field of Contemporary Art but also literature, dance, theater, music, and cinema.

An internationally recognised and appreciated artistic event, the Lyon Contemporary Art Biennale is one of the five most important biennales after Venice. The previous edition attracted more than 300,000 visitors, its best-ever attendance. The 2019 edition is far more ambitious with larger spaces, major installations, deeper regional networking and unprecedented bridges between the art world and the world of business and commerce.

In 1999, in conversation with thierry Ehrmann, Thierry Raspail perfectly summed up his vision of the Lyon Biennale…. "Biennales are geo-political acts. They mark the territory between where there is everything and where there is nothing..." , a bold statement that highlights with rare clarity the primary and underlying logic of Biennales wherever they are staged.

Artprice is listed on the Eurolist by Euronext Paris, SRD long only and Euroclear: 7478 - Bloomberg: PRC - Reuters: ARTF.

Discover Artprice in the video: https://www.artprice.com/video

Artprice is the global leader in art price and art index databanks. It has over 30 million indices and auction results covering more than 700,000 artists. Artprice Images® gives unlimited access to the largest Art Market resource in the world: a library of 126 million images or prints of artworks from the year 1700 to the present day, along with comments by Artprice's art historians.

Artprice permanently enriches its databanks with information from 6,300 auctioneers and it publishes a constant flow of art market trends for the world's principal news agencies and approximately 7,200 international press publications.

Artprice is associated with Artron Group the Chinese leader in the Art Market, its solid institutional partner.

Partners since 2009, in 2018, Artron and Artprice signed a historic agreement to create a "New Silk Road for Art". This initiative is perfectly coherent with China's "One Belt, One Road" (OBOR) or "Belt and Road Initiative" (BRI) launched in 2013 and known in Europe as the "New Silk Road".

Having produced more than 60,000 books and auction catalogues, Artron is the world's largest art book printer with a total print volume of 300 million a year. It has more than 3 million professional members in the arts sector and an average of 15 million daily visits, making it the world's leading art website."