ZHUHAI, China, Jan. 25, 2018 /PRNewswire/KOREA IT TIMES-- Recently, a signing ceremony between Phoenix Mart and Gree Electric Appliances Inc. of Zhuhai was held in Arizona, America, which means Phoenix Mart will fully adopt the PV air conditioning system independently developed by Gree. The size of this trade center is equal to 84 standard soccer fields, therefore over 1,200 sets of PV air conditioners will be needed, with over 6.7 megawatts installed capacity of the PV panels and over 4,200 refrigeration tons of cooling capacity. It is the largest PV air conditioning project in America and even in the world at present. 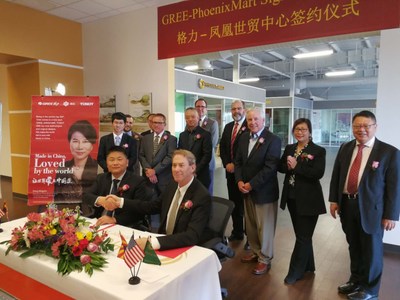 Gree PV air conditioners will make great contribution to the Phoenix Mart in electricity saving and emission reduction. It is calculated that Gree PV multi VRF units adopted in Phoenix Mart can generate about 10,500,000 kWh of electricity annually, and can save about tens of millions of US dollars in 30 years. Moreover, this project can help to reduce the emission of about 8,600 tons of CO2, 72 tons of SO2, 33 tons of nitride, and 56 tons of dust. The general benefits from emission reduction will be over 2 million US dollars.

Gree has established 5,000 sets of PV systems in 22 countries and regions at present.

In recent years, demand of PV air conditioners has been increasing rapidly in the global market, and America has become one of the fastest growing PV markets. There's no doubt that Phoenix Mart's choice of Gree PV air conditioning system will bring a good demonstration effect to the market.

Objectively, the use of PV air conditioners in a large scale will make significant contribution to the future energy structure. The motivation for changing the energy structure comes from both the increasing deficiency of fossil energy and the ever-growing needs for environmental protection (especially for nitrogen oxides emission reduction).

Gree PV air conditioners can not only directly lower the demand of power supply but also deliver excess power to the power grid, and at the same time, reduce the emission of nitrogen oxides and other pollutants. If the current HVAC products are all replaced by PV air conditioners, it will result in a very prominent improvement in energy conservation and emission reduction.

On the basis of PV air conditioning system, Gree further upgrades the overall solution to energy supply and consumption. It has developed the G-IEMS local energy internet system by tackling the challenges in clean energy supply, development of efficient equipment and intelligent energy distribution and management. The local energy internet system G-IEMS can not only realize ternary current commutation but also free energy exchange among power generation, power consumption, power grid, power storage and even more terminal units in a wide networking system from devices to families, buildings and even to communities and parks.

In September 2017, Gree G-IEMS system was officially launched to the world at IFA (an international electronics exhibition held in Berlin, German). Prof. Leo Lorenz, academician of the German Academy of Sciences, and member of the Committee of the Nobel Laureates Preliminary Selection, made a speech at the launch and said, "The successful development of Gree G-IEMS is of great significance to the world's energy conservation and emission reduction, promoting it further to a new stage."

Gree's success in establishing its independently developed PV air conditioners in Phoenix Mart will undoubtedly show the strength of its technology breakthrough to North America and even the world. It will rewrite the world energy pattern, contribute to the upgrading of world energy structure and encourage the world's effort in energy conservation and emission reduction.