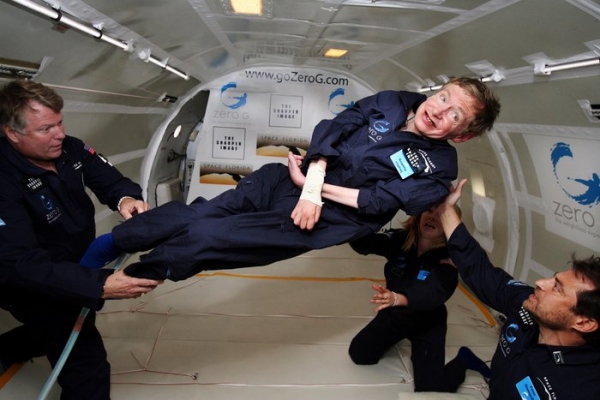 Stephen Hawking enjoys a microgravity flight aboard a modified Boeing 727 aircraft owned by Zero Gravity Corp. ESA is saddened by the news of the passing of Professor Stephen Hawking, FRS, cosmologist and one of the pioneers of theoretical studies of black holes, on 14 March at the age of 76.

Diagnosed with a progressive motor neurone disease at a young age, Stephen Hawking nevertheless went on to make key contributions to our understanding of the properties of black holes. Most notably, he took the ground-breaking step of combining quantum mechanics and general relativity to predict a form of radiation from their event horizons that should cause them to evaporate slowly, contrary to all prior predictions.

Following the publication of his best-selling book A Brief History of Time in 1988, he became a public figure, communicating science to a worldwide audience. Instantly recognisable owing to his wheelchair and computer-generated voice, he reached iconic status, appearing as himself in shows including The Simpsons, Star Trek: The Next Generation and The Big Bang Theory, as well as being portrayed in the biographical films Hawking and The Theory of Everything.

His deteriorating physical condition did not constrain his mind or his puckish sense of humour, and he showed continued dedication to humanist and socialist causes throughout society. He was worried about the future of humankind and used his public platform to address these concerns.

It is his insightful and innovative scientific legacy that will remain, and generations of scientists to come will be working on the predictions he made regarding some of the most exotic phenomena our Universe has to offer. They will be helped in part by new missions being developed by ESA, including the Athena X-ray observatory and the LISA gravitational wave observatory, for both of which black holes will be fundamental targets.

Prof. Hawking always wanted to go into space himself and, while that is unfortunately no longer possible, we hope that, in some small way, we can play a role in ensuring that his scientific vision does.

This article has contributed by ESA