LAS VEGAS, Dec -- VisualCamp, a member company of the K-ICT Born2Global Centre, will officially launch TrueGaze, one of the most advanced gaze analytics and smartphone eye control solutions on the market, at CES 2019, according to PRNewswire on December 18. 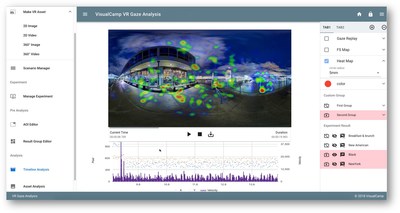 TrueGaze enables developers and smartphone manufacturers to scan information from users' visual gaze and enable eye control for various user applications. The company will offer demos of its visual technology at CES 2019, where visitors will have the chance to use their eyes to play games, scroll apps, and watch 360 video.

As a versatile platform, the potential benefits of eye tracking is virtually unlimited. Not only does TrueGaze present a new way for people to interact with their smartphones, but it also has the potential to change the face of gaming and any visual-based application. TrueGaze also provides novel user insights that will allow developers, manufacturers and marketers to vastly improve user experience all from an easily accessible eye-tracking platform.

VisualCamp's customers vary from mobile phone manufacturers, to mobile and VR developers, academic researchers, as well as brands who want to implement eye-tracking in their market research. These partnerships include a potential VisualCamp-developed eye tracker for the upcoming Pimax 8K headset.

VisualCamp's TrueGaze low-latency, low-CPU usage, and AI-enabled precision accuracy provides the best eye-tracking on the market. Eye-tracking features will be available to demo by media at CES 2019 and will include the following:

VisualCamp is also partnering with interactive advertising firms to help develop services using their technology. Partner brands have included a well-known carmaker, which was able to track what part of its vehicles people were most interested in while browsing models online. VisualCamp's technology has also been implemented by Samsung for their VR products.

The company's demo will take place at the Las Vegas Convention Center, South Plaza, Booth 63325 from Jan. 8th - Jan. 11th 2019. Visitors will have the chance to play games, scroll apps, and use 360 video during the demo. Along with the phone demos, there will be a demo with VR developer Pimex at CES, in which a foveated rendering presentation will be provided to visitors on site.

Video footage and screenshots of VisualCamp's products in action are available in their media kit here.

VisualCamp is a Seoul, South Korea-based mobile software provider that specializes in eye tracking and visual data. The company was founded in 2014 with the backing of Samsung Electronics, and other leading investors in South Korea. VisualCamp supported by major South Korean institutions such as SK Telecom, Ministry of Science and ICT (MSIT, Korea), Ministry of Trade, Industry and Energy (MOTIE), Electronics and Telecommunications Research Institute (ETRI) and others.